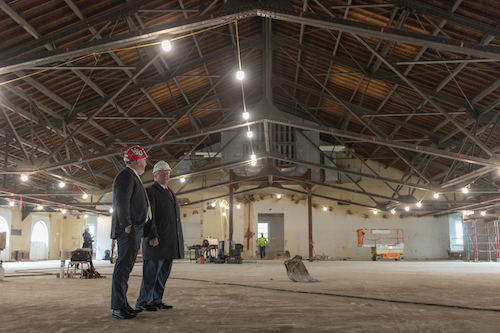 Right now there’s a huge construction zone at the top of WKU’s campus but the result will be worth the wait.

Helm Library is being transformed into a space called the WKU Commons and WKU’s Amy Bingham gives us a peek inside in this week’s View from the Hill.

Helm Library. It started out as a gym, transformed into a library and now the space is being reimagined again -- this time as a place to study, eat and gather at the top of the Hill.

There’s nothing common about the WKU Commons.

“There’s not another university in the state of Kentucky that has a space like this.”

WKU’s Board of Regents recently got to see the transformation for themselves.

“I think it’s always exciting to go in a building that’s under construction and you really see how invasive the construction is.”

“We’re taking portions out of the ceiling to open up the building. You know you’ll be able to stand on the first floor and look up to the third floor.”

“Between the first and second floor will be where all the foot traffic is coming in.”

One of the Regents getting a tour is Student Government Association President Will Harris. He brought a student perspective to  the Commons Committee.

Freshman Catherine McAninch also got a peek inside. She’s focusing on the project for one of her architecture classes.

“I think it’s just so amazing to have that traditional style of architecture that you associate with university education mixed with this new modern aesthetic.”

A modern approach combining study space with social space in one of WKU’s most historic buildings.

“On the lower floor it’s a very social space. We’ve got four dining venues. As you go up in the building it gets more intellectual.”

“This is gonna be a place you go to the top of the Hill, grab something to eat, hang out with friends, study, whatever it is you need to do, this is gonna be the environment for you to do it.”

The WKU Commons at Helm Library is scheduled to open to students in the fall of 2021. Learn more at https://www.wku.edu/commons/