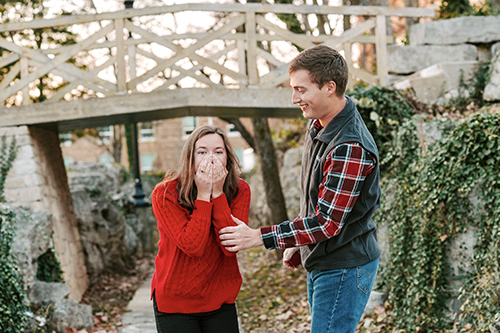 A survey released back in 2015 ranked WKU the No. 1 campus to fall in love.

A recent grad says she never dreamed it would happen to her but it did and now the couple’s story has WKU all over it as WKU’s Amy Bingham explains in this week’s View from the Hill.

Katie Allison and Jared Murray are one of literally thousands of matches made on the Hill.  They met and fell in love on campus, got engaged on campus and this summer they will marry on campus.

“We were crushing on each other since the second day of Master Plan.”

Classes hadn’t even started yet when Katie Allison and Jared Murray, who were both with friends, first met at a table next to the Fine Arts Center.

“They came and sat down with us and we were just kind of sitting there and I was just kind of looking at him I thought he’s pretty cute but I didn’t think anything would occur from it. “

That was back in 2015 and they’ve pretty much been inseparable since.

“We were each other’s first boyfriend and girlfriend ever. So I really wasn’t planning anything.  I just wanted to hang out more and see where, kind of, it went.”

Where it went was a full blown courtship full of fun WKU memories.

“Looking back it was a good time, it was fun.”

Fast forward to last November when Jared took the next step.

“I figured it would be a lot special if I proposed on campus where we met.”

And the way he set it up was pretty clever.

“She was taking her senior pictures and I had contacted the photographer beforehand.  So  I told her that maybe we can get some couples pictures after she takes her graduation photos.”

In between poses, Jared popped the question.

“The best thing was the bells went off at Cherry Hall right after he proposed and it was just so magical and overwhelming and just awesome it was just the best.”

WKU will continue to be the backdrop for the couple’s romance when they get married this summer at Chandler Memorial Chapel.

“We just love campus and can’t imagine getting married anywhere else.”

Last time we checked, alumni records indicated more than 13,000 WKU graduates were married to another alum. That’s a lot of Hilltopper sweethearts.