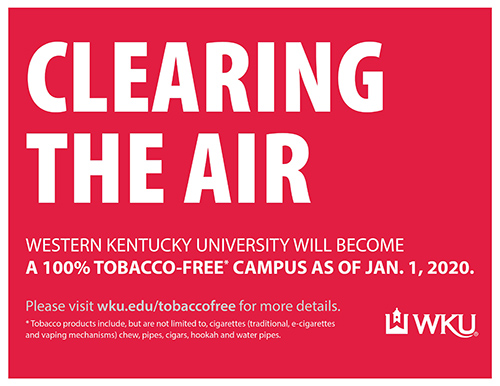 WKU will be clearing the air in the new year after adopting a tobacco-free campus policy effective January 1, 2020.

WKU’s Amy Bingham has more on the transition in this week’s View from the Hill.

It’s been two years since WKU received a tobacco-free grant from the American Cancer Society. The policy was approved earlier this year and now it goes into effect in just a few weeks.

Beginning January 1, there will no longer be designated smoking areas on campus.

“We are going to be putting signs up over the break and when everybody comes back in January the signs will be there.”

“What we’re really looking for is to develop a culture of health.”

The most recent survey shows 11 percent of WKU students smoke, but a higher number, 29 percent, use e-cigarettes.

“We know there won’t be complete compliance, it will be a challenge for a while. But what we hope will happen is it will eventually become the norm to not smoke.”

“I think a lot of students are excited that there’s gonna be a policy on campus to prevent or prohibit smoking and especially now the common thing among college students is vaping.”

As a member of the task force, Pennington helped organize awareness events on campus.

“In March we had kick butts day it was an awesome event. We had about 100 volunteers, we had students from all different disciplines we had athletes come and help and we collected 10 pounds of cigarette butts around campus.”

She says the task force has emphasized from the beginning it wants this to be a positive change.

“We want to be compassionate and let them know there are cessation resources in place on campus for them.”

“We want everybody in the campus population take responsibility for that.  If you see someone gently say you know this is a tobacco-free campus.”

The complete policy, cessation services and other information can be found on the WKU Tobacco Free website at https://www.wku.edu/tobaccofree/.