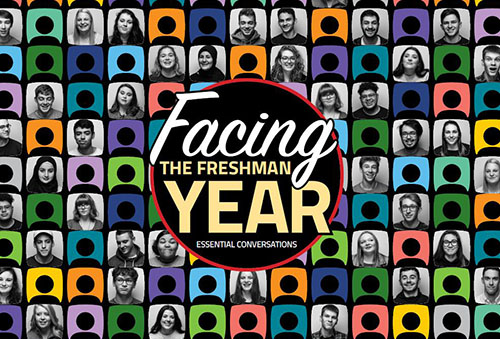 A raw look at the emotions college freshmen experience is on full display at the Kentucky Museum.

WKU’s Amy Bingham has more on how this exhibit came to life in this week’s View from the Hill.

They are sophomores now, but last year 50 academically representative freshmen from the Bowling Green area were selected to be a part of Freshman Guided Pathway, a program that provided them extra support. Now their journey, including many of their struggles, is part of a powerful exhibit.

“I have no clue where my picture is.”

Sophomore Reily Booker is seeing the exhibit for the first time.

“They wanted the realness and that’s what we gave them.”

She’s one of dozens of students who documented their freshman feelings last year.

“We believe that everybody needs to be part of a group.”

“Seeing themselves in these faces and seeing their stories in these stories.  It’s so much more powerful than hearing from the same tired voices they’ve heard it from teachers and parents and college professors.”

“I’m an overthinker, I overthink in college …”

Sophomore Joanna Carey is reading the nugget of wisdom she gleaned from her freshman year in hopes of helping the students coming behind her.

“I would love to be able to help them through their first year because I know that it can be tough coming from high school to a university like this.”

“I didn’t realize how many of us there were.”

That connectivity made a difference.  The program had a 96 percent retention rate after the first semester and 82 percent after the second semester.

“It’s like having a team of guidance counselors with you at your beck and call at any time. I had their phone call or their email anytime I needed them.”

“I wouldn’t have felt confident if it wasn’t for this program and I would have felt really alone.”

Extra support that turned out to be a game changer.

“Had I not had Freshman Guided Pathways I would have been lost in all likelihood."

This year 75 freshmen have been chosen to be part of Freshmen Guided Pathway. They met with last year’s cohort at a special screening of the exhibit. If you would like to schedule a tour, visit www.wku.edu/kentuckymuseum