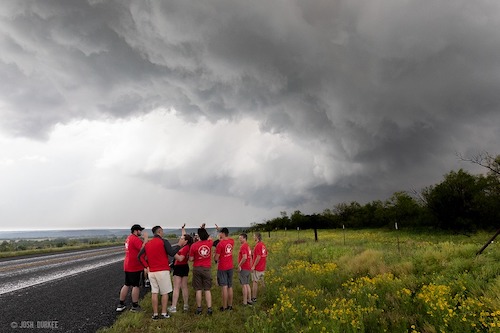 For the tenth year in a row WKU sent a storm chasing crew to the mid-West to put their forecasting skills to the test.

But this trip had a couple of new additions as Amy Bingham explains in this week’s View from the Hill.

How many university presidents would spend nearly a week with students chasing storms across the country?  There’s one for sure and his name is Tim Caboni.  He took part in the WKU storm chase trip last month.    So did a WKU-PBS student worker who was able to document the whole trip on video.

“This was huge for me.  This was the biggest thing they’ve every asked me to do.”

“I was in and out of the van every time they got out and they were telling me and explaining to me what we were seeing and everything else to the point where I felt like I was chasing too.”

Someone else getting an up-close look at meteorology on the first half of the trip was none other than WKU President Tim Caboni.

“On the first day that we could meet up we put him in a position to see a severe storm.  They saw it from the east and we were coming from the west. “

“When you think university president you don’t think you. Know of having them come out to chase these dangerous storms putting themselves in this kind of situation where you see these awesome storms with students.”

Since 2010 WKU’s Meteorology Department has offered the storm chasing trip as a class.

“The trip is competitive by selection. Eight students get to go, many more want to go so they can say they were selected.”

Durkee says it’s often a game changer on a resume.

“When I’ve described this experience to employers I’ve actually had them say that changes our opinion on everything and these students are getting hired.”

It’s the kind of applied research and hands on learning Jordan Crabbe is used to.

“It’s very similar I feel like to how we are at PBS and how we are with students because it’s so involved it’s so engaging and pro-active with their futures.”

And at least for this year, it showed the university president what storm chasing is all about.

“He’s always so engaged in things that are going on around campus and this was no exception.  He was right in it with us.”

Crabbe is planning to use her footage to produce a documentary. In 2010, the trip’s inaugural year, it was recognized as one of the leading innovative summer programs in North America.