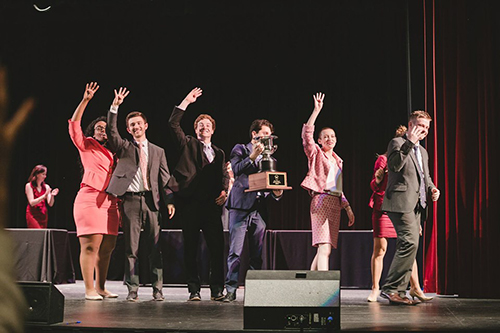 Seniors on the WKU Forensics Team signaled the team's "4s Up" slogan at this spring's 2019 NFA national tournament. After a change in final results, WKU has been named the national champions of the 2019 AFA National Individual Events Tournament.

The WKU Forensics Team has been named the national champions of the 2019 American Forensic Association National Individual Events Tournament, after a two-month investigation found that two students of the original winning school had violated the league’s code of standards.

The WKU Forensics Team had been announced in April as second place, but this change makes WKU the AFA NIET team sweepstakes champions for the first time since 2015.

This change may also affect rankings in individual sweepstakes, which is a measure of an individual’s success across multiple competition events at one tournament. The AFA NIET does not intend to finalize this decision, however, until November. If the league follows through, this may raise the individual sweepstakes ranks of one or more of the following WKU team members: graduating senior Casey Child (originally fifth), rising junior Derek Collins (originally sixth) and rising junior Rickey Williams (originally 16th). However, graduating senior Andrea Ambam’s Individual Sweepstakes National Championship remains unchanged.

The league opted to not re-rank the remainder of the duo interpretation finalists, though, so those ranks will stand as they were announced in April. WKU had two teams in that final round.

WKU sent 20 competitors with a total of 66 entries to the AFA national tournament. Of the 66 total entries, 36 advanced to quarterfinal rounds, 26 advanced to the semifinal round, and 12 events made it to the final rounds of competition. Last year, the team fielded 31 quarterfinalists, 21 semifinalists and 15 finalists.