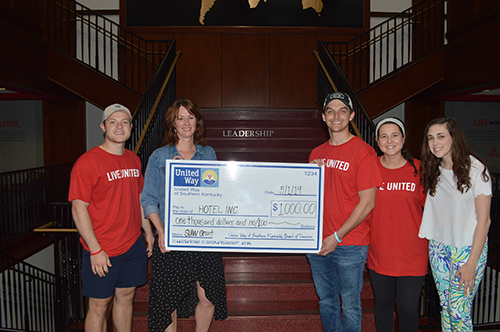 WKU’s chapter of Student United Way set a goal at the beginning of the 2018-2019 school year to raise enough funds for a community grant to be made to a United Way of Southern Kentucky (UWSK) affiliated program by the end of the school year. Through a variety of fundraising efforts over the past year, most notably a Cornhole Tournament in the Fall of 2018, WKU’s Student United Way raised enough money to award a grant in the amount of $1,000.

All WKU Student United Way Executive Board and General Members were invited to be a part of the group’s Allocations Committee to determine where the dollars would be granted. The Executive Board members of the organization were provided with a document outlining UWSK’s category focus areas (Education, Income, Health, and Safety Net) and a list of the corresponding programs that fall within each issue area. After discussing the issues, the group chose to focus on the area of Health: Access to Affordable Healthcare to review grant applications for potential funding.

In April, program applications within the area of Health: Access to Affordable Health were made available to the students to review prior to a group discussion. In late April, nine students met to discuss the four applications. Emily Anne Pride, UWSK Marketing Coordinator, was present at this meeting to lend her experience and knowledge to the process as well as answer any questions that the students had related to the applications or programs. Several students also had the opportunity to attend program site visits.

After a thorough review and discussion, the president of WKU Student United Way Colton McGlone led a group vote to determine which program to recommend for funding. By majority vote, the group elected to provide funding to HOTEL INC’s Street Medicine Program.

HOTEL INC was established in 1981 to serve the impoverished and homeless families of Warren County. The name is an acronym standing for Helping Others Through Extending Love In the Name of Christ. HOTEL INC seeks to serve people who are experiencing homelessness efficiently and effectively. Their programs are coordinated through three focus areas: Homeless and Housing Services, Food Insecurity, and Street Medicine. The Street Medicine program is currently our area’s only comprehensive street medical outreach program in Warren County. The program supports three teams of volunteer physicians, nurses, emergency and public health providers and staff to provide medical assessment and treatment, and to coordinate a continuum of care for homeless families. This program also includes a medical respite service for individuals too ill to be on the street but not ill enough for hospital admission. Street Medicine saves the community costly interventions while offering individuals the kind of service which leads to greater stability and a path out of poverty.

Members of WKU’s Student United Way gathered along with United Way representatives and local media at Downing Student Union on May 1 for the official check presentation.

For information on how you can make the choice to LIVE UNITED through giving, advocating and volunteering, log on to the United Way of Southern Kentucky website at www.liveunitedtoday.com.