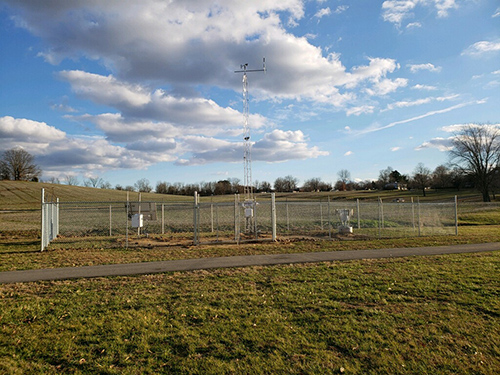 The Kentucky Mesonet at WKU has completed installation of a station in Webster County.

The site at Baker Park in Dixon is the 70th operational station in 69 counties following the installation of a station in Pulaski County last fall. The statewide network is the Commonwealth’s official source for weather and climate data.

“The Webster County site highlights the importance of partnerships to fund local projects in the public domain,” said Dr. Stuart Foster, director of the Kentucky Mesonet at WKU and the Kentucky Climate Center.

“The leadership of Webster County Judge-Executive Steve Henry helped make this partnership possible,” Dr. Foster said. “And we had the support of the City of Dixon to provide the site at its city park.”

The Mesonet station will collect real-time data on temperature, precipitation, relative humidity, solar radiation, wind speed and direction and transmit it to the Kentucky Climate Center at WKU every five minutes, 24 hours per day, throughout the year. The data will be available online at www.kymesonet.org.

Probes to monitor soil moisture and soil temperature also will be installed at the station.

In addition to the standard suite of meteorological instrumentation, the Webster County station includes a field observation camera. “This site is one of a small number of Mesonet stations that have a camera to provide visual imagery of landscape and weather conditions,” Dr. Foster said. “The landscape images will aid with drought monitoring and will be available to the National Weather Service to monitor storms and winter weather in Webster County.”

The Webster County Cooperative Extension Board will provide support for annual operational and maintenance costs through a station sponsorship. “Sponsorships are critical, as they allow us to continue to expand the Mesonet to improve coverage and service throughout Kentucky,” Dr. Foster said. “Further, sponsored stations receive priority for investment of federal funds available through the National Mesonet Program.”

The addition of the Webster County station reflects growing recognition of the value that the Kentucky Mesonet brings to communities. “We continue to work with local officials and stakeholders who have expressed interest in the Mesonet and expect to add three to five stations to the network this year,” Dr. Foster said.