After nearly 40 years, Kell in stretch run of involvement with 10K Classic 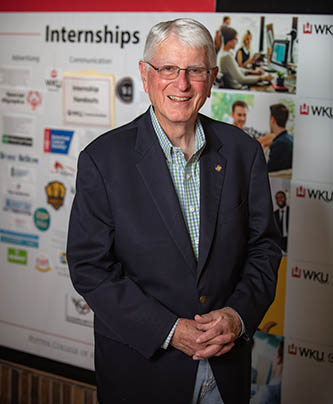 Dr. Carl Kell won’t be running in the Med Center Health 10K Classic on Saturday (Oct. 13), but he will be crossing the finish line.

After being involved with the race since its inception as the Wendy’s 10K Classic in 1979, Dr. Kell will be stepping away from his roles as 10K organizing committee member, race day radio broadcaster and awards ceremony emcee. (More: View from the Hill segment; 10K Classic campus traffic advisory)

Dr. Kell, professor emeritus in WKU’s Department of Communication, turned 80 on Oct. 2. “I tried not to look it and sure tried not to behave it,” he said of his age. “But it’s a good time to finish a number of things and move on to new challenges.”

Dr. Kell joined the WKU faculty in 1972 and began running in the mid-1970s. As interest in road running and 10K races grew, he and others in the community began developing plans for the first 10K Classic in 1979. In its early years, the race attracted a field of elite runners from the United States and other nations and was televised on ESPN.

Bowling Green became a premier location on the 10K schedule because it had a certified course, top runners and community support. “It wasn’t just another race, it was an event,” Dr. Kell said.

But, by the late 1980s, the culture of running and races evolved. “The whole world has changed regarding competitive American and international road running,” Dr. Kell said. “The largest cities are the ones that draw the most attention. Because marathons have become the soup of the day for runners, they’ve taken over the number of new races.”

In 1988, the race name was changed to The Bowling Green 10K Classic. In 2000, The Medical Center became the title sponsor. Over the years, the event has added a 10K wheelchair race, a 5K run/walk, a 3K fun walk and the Children's Classic.

“Thousands of people have come through the streets of Bowling Green and tens of thousands of dollars in prizes given away,” Dr. Kell said.

Among Dr. Kell’s memorable 10K moments: The finish line arrest of a runner who was behind on alimony and child support payments; and the morning a top runner from Africa took cover during a storm then outran most of the field to finish fourth.

Jeff Younglove, retired director of Campus and Community Events at WKU, said Dr. Kell has been a recognizable fixture of the 10K Classic. “Those who have been involved with a lot of 10Ks would certainly know the name Carl Kell and his involvement with it,” he said.

As emcee of the awards ceremony, Dr. Kell “is popular with the runners,” Younglove said, “but he’s probably more popular with those who win money because of the cash awards part of it.”

Dr. Kell, who does more walking than running these days, is proud that the 10K Classic remains a fair and fun race on a certified course and is one that participants return to each year to renew old acquaintances. “When you came here you got several things,” he said. “You got a fair race, you got a certified course and you got people to talk to you who were courteous and welcoming.”

As the finish line nears, Dr. Kell can look back fondly on the past 39 years: “I’ve done it enough. I’ve seen all the highs and lows. I’ve been frightened and I have learned all in all the sport returned more to me than I ever gave to it.”

The Hilltoppers take on Liberty University this Saturday in the first home game of the season. It’s music to the ears of one group that’s especially excited to attend, as WKU’s Amy Bingham explains in this week’s View from the Hill.

"Appalachian Reckoning: A Region Responds to Hillbilly Elegy," co-edited by WKU History Professor Anthony Harkins, is among the winners of the 41st annual American Book Awards presented by the Before Columbus Foundation.

Zane Meyer-Thornton, a junior photojournalism student from Los Angeles, California, received a $10,000 scholarship from the Facebook Journalism Project and the Native American Journalists Association (NAJA) for the 2020-21 academic year.

The Kentucky Mesonet at WKU will play a key role in a $5 million National Science Foundation project aimed at making further advances in near-term forecasts that can be critical in active and severe weather situations.