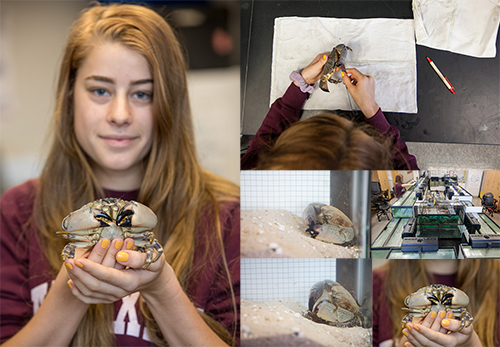 The stone crab may be small, but its crusher claw packs a large bite force.

“All of the force is focused on those tiny little teeth and that gives them the ability to crush those mussels and anything that goes in between their claws,” Gatton Academy senior Olivia Bickett said while watching her five research subjects in WKU Biology Professor Steve Huskey’s lab in the Engineering and Biological Sciences building. (More: Watch a video segment by Discovery's Daily Planet)

The stone crab has a varied diet, most notably mussels and other bivalves that have an extremely thick and hard shell. These crabs are able to crack into the tough shells with ease to extract their meal.

Bickett’s project aims to quantify the pressure produced by the stone crab’s claw. When testing the bite, she tapes a small piece of Fujifilm force paper onto a metal ruler. The force paper has tiny capsules embedded that produce a pigment on impact that gauges how much force is exerted per unit of area, or pressure.

She uses a net to remove one of the crabs from its tank then dries it off to prepare for the test. “Getting them to clamp down on it is harder than you think,” she said.

But when they clamp down, you know it.

For comparison, Dr. Huskey said alligators bite with 3,000 pounds of force but because the alligator is using many teeth the pressure is spread out over a larger surface area. The stone crab’s bite is focused on one tooth, which amplifies the pressure.

“An alligator bite is painful, but a stone crab bite is going to be just as painful,” he said. “This thing is just a thousandth the size of an adult alligator. If you grew this up to the size of an alligator it could walk around and pinch through walls easily. It’s really a marvel of natural selection to be able to produce those kinds of forces with the resultant pressures. Forget the Jaws of Life, these things have the Claws of Life, or even better, the Claws of Death.”

The force paper only measures up to 43,200 PSI, but Bickett and Dr. Huskey know the pressure exceeds that amount. “We don’t really know what their maximum is,” Dr. Huskey said.

Bickett and Dr. Huskey hope to publish the findings in a scientific journal.

“We’re not really testing a hypothesis per se,” he said. “We are simply trying to describe something that to this point nobody has quantified. So it’s going to be a good base of information for experts in crabs or claws to use as foundational data and good comparative information between species.”

Bickett, the daughter of Gary and Karen Bickett of Owensboro, will graduate from The Gatton Academy in May and is using the research project as a springboard to an undergraduate program in marine science at Eckerd College in St. Petersburg, Florida.

Even though she grew up several hours away from the ocean, Bickett said she’s always been interested in marine science. And she’s enjoyed learning more about the stone crabs.

“Something about them just fascinates me,” she said. “I’m not a patient person but I’ve sat in here literally for hours just staring at them.”