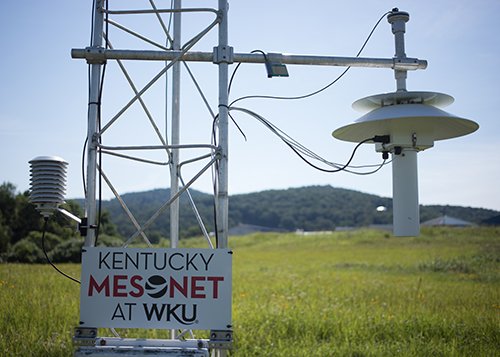 “We’re excited about this partnership and the enthusiasm from the Pulaski County groups,” said Dr. Stuart Foster, director of the Kentucky Climate Center and the Kentucky Mesonet at WKU. “We see this site as a natural opportunity for education outreach in addition to providing support for public safety and agriculture in Pulaski County and the surrounding area.”

Installation of the station is expected to begin later this spring.

The Kentucky Mesonet at WKU is the Commonwealth’s official source for weather and climate data. The statewide network includes 69 stations in 67 counties.

“This is a great opportunity for our school system to partner with the community to provide not only much need climatological data for our community and farmers, but also learning opportunities for our students,” said Patrick Richardson, Assistant Superintendent of Pulaski County Schools.

The Pulaski County site is the fifth funded through local partnership agreements, but more are on the way, Dr. Foster said. “We are nearing an agreement in another county in western Kentucky and are exploring opportunities in several other counties,” he said.

In far western Kentucky, the Kentucky Climate Center has reached a sponsorship agreement with the Fulton County Conservation District and has made significant equipment upgrades to the Kentucky Mesonet station located one mile from the Mississippi River.

“This site at Hickman is a very important station for us because of its location in the extreme southwestern corner of Kentucky,” Dr. Foster said. “Located at Fulton County High School in partnership with the Fulton County Board of Education, the station provides us with the first glimpse of weather coming into Kentucky from the west.”

The Mesonet stations collect real-time data on temperature, precipitation, humidity, solar radiation, wind speed and direction and transmit it to the Kentucky Climate Center at WKU every five minutes, 24 hours per day, throughout the year. The data is available online at www.kymesonet.org.

In recognition of the Fulton County Conservation District’s commitment, the Kentucky Mesonet at WKU has made the following upgrades at the station: new precipitation gauge, installation of soil temperature and soil moisture probes; and installation of a temperature inversion monitoring package.

The Fulton County site will be one of six stations (Christian, Hardin, Henderson, Shelby and Simpson) with the temperature inversion monitoring package that is part of a regional pilot project funded through the USDA Midwest Climate Hub.

“This package will provide much needed data to identify when temperature inversions are forming and will be important for farmers making decisions on when to apply chemicals to fields with a focus on dicamba, a herbicide used on soybeans,” Dr. Foster said.

Temperature inversions can trap dicamba near the surface and cause it to drift onto other fields and crops, he said.

“We will be evaluating the data collected through this pilot project and make decisions about whether to make investments in additional sponsored stations going forward,” he said.