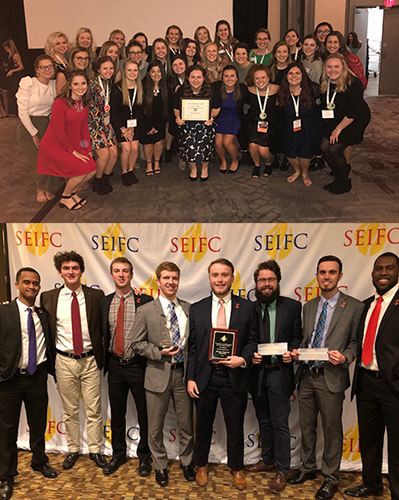 The WKU Panhellenic and Interfraternity councils were recognized during leadership conferences this month.

“WKU Panhellenic had great success at the Coalition for Collegiate Women Conference this year,” WKU Panhellenic President Cejay Moore said. “I was honored to accept the Circle of Sisterhood award and the Leadership Development award on behalf of the WKU Panhellenic community for our great progress in these two areas this past year. This experience set the bar high for our Panhellenic community and I’m excited to lead so many amazing women and to continue to build on our success in 2018.”

The Interfraternity Council won the Outstanding Service Project Award and was one of three IFC councils to win the Fraternal Excellence Award at the Southeastern Interfraternity Conference (SEIFC).  In addition, IFC executive council members Daniel Correll and Justin Downey placed second in the Order of Omega Case Study Competition.

“Although we do not strive for excellence in our operations for the sake of winning awards, it feels good to be recognized for our hard work,” WKU IFC President Benjamin Hopper said. “In the upcoming year, we will work diligently to build upon this success and challenge our fraternities to continue to improve WKU Greek life."

The CCWL and SEIFC conferences host Panhellenic and IFC councils from schools all over the country.