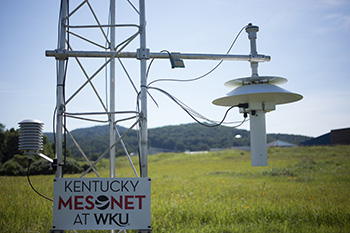 The Kentucky Mesonet at WKU is installing a station in Monroe County.

The site near Gamaliel is the 69th station in 67 counties for the statewide network that is the Commonwealth’s official source for weather and climate data. The station is the fourth funded and supported through local partnership efforts.

“The station is strategically located on land near the Gamaliel Shooting Supply approximately two miles from the Tennessee border and will be particularly valuable in helping to provide residents of Tompkinsville and Monroe County with data from storms that are entering the county from Tennessee,” said Dr. Stuart Foster, state climatologist and director of the Kentucky Climate Center and Kentucky Mesonet at WKU.

The Mesonet stations collect real-time data on temperature, precipitation, humidity, solar radiation, wind speed and direction and transmit it to the Kentucky Climate Center at WKU every five minutes, 24 hours per day, throughout the year. The data is available online at www.kymesonet.org.

“This new station also will be a critical source of data as a complement to radar for forecasters at the National Weather Service Forecast Office in Louisville when they have to determine whether to issue severe storm warnings for Monroe County,” Dr. Foster said.

John Gordon, meteorologist-in-charge at the National Weather Service Forecast Office in Louisville, agreed. “The National Weather Service is delighted to have a Kentucky Mesonet station in Monroe County near where the February 2008 tornado struck,” he said. “The data from the Kentucky Mesonet will be invaluable for our mission of the protection of life and property.”

The 2016-2018 budget approved by the General Assembly includes $750,000 a year for the Mesonet, but Dr. Foster and others have been working to develop local partnerships across Kentucky to expand and maintain the network.

“This station reflects a lengthy, but dedicated effort involving stakeholders in Tompkinsville, including Mayor Scotty Turner, to commit funding and find a desirable site for a station that will best meet the needs of local residents,” Dr. Foster said.