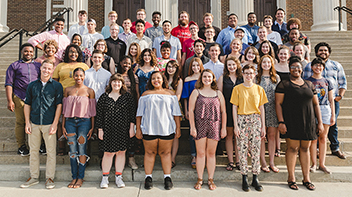 The 41 members of the WKU Forensics Team are preparing for the 2017-18 season that begins Sept. 22 with the annual WKU/Alumni Fall Swing Tournament and the Alexis Elliott Memorial Lincoln-Douglas Round Robin debate tournament.

The nationally recognized speech and debate team welcomes 14 new members this fall and includes students from across the United States pursuing numerous academic programs at WKU.

“This summer, we were so excited to welcome this incredibly talented group of students,” WKU Director of Forensics Ganer Newman said. “After watching the effort they put into their events during preseason boot camp and the way they came together, I cannot wait to see what they will accomplish this season.”

“Our students are thrilled to build on WKU’s tradition of excellence in speech and debate. We especially want to make sure that Dr. Caboni’s inaugural year as our university president is a championship season,” Newman said.