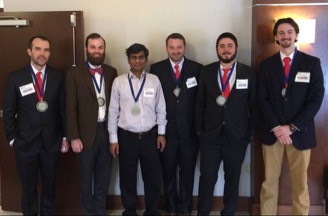 A team of WKU geology students participated in the 2017 finals of the prestigious Imperial Barrel Award (IBA) program.

Among 192 universities around the world, WKU was one of 12 universities that advanced to the international finals held on April 1 in Houston, Texas.

The event, organized by the American Association of Petroleum Geologists (AAPG), is an annual global competition to advance the science of geology by analyzing various types of subsurface data to evaluate energy resources. This year’s event, held concurrently with the annual convention of the AAPG (April 2-5), was special as it marked the 100-year anniversary of the AAPG. WKU alumni attending this centennial celebration of AAPG were happy to witness WKU participating in the IBA finals for the first time.

Dr. David Keeling, head of WKU’s Department of Geography and Geology, noted: “This is an extraordinary achievement by Dr. Gani and his IBA student team competing at the global level. The team demonstrated an outstanding level of commitment, tenacity and hard work in preparing for the competition in such a short period of time.”

The WKU team advanced to the international finals by winning the 2017 Eastern Regional in March.