CBS Sunday Morning to air segment on exhibit at WKU 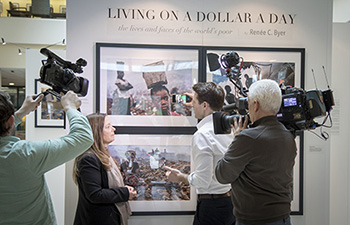 CBS Sunday Morning will air a segment April 9 on Living On A Dollar A Day: The lives and faces of the world’s poor, an interactive photo exhibit by Renée C. Byer that is on display at WKU's School of Journalism & Broadcasting.

A crew from CBS recently interviewed Byer at Mass Media and Technology Hall. CBS Sunday Morning airs at 8 a.m. CT on WNKY in Bowling Green; check local listings for times in your area.

The exhibit, which is on display at the MMTH Gallery and Atrium through April 28, is a powerful and extraordinary series of photographs and profiles by Byer, a Pulitzer Prize winning photojournalist whose work illuminates the human faces of people who live in extreme poverty around the world. Traveling to 10 countries on four continents, Byer sought out individuals and families on the brink of survival – living on about one U.S. dollar each day. The people in Byer’s compelling profiles share their hardships, their joys, and their dreams for the future with her. Often with little hope of changing their own destiny, they dream of something better for their children. In her searing and tender images, accompanied by stories shared by people whose trust she gained, Byer gives voice to those who would not otherwise be heard.

Read more about the exhibit.