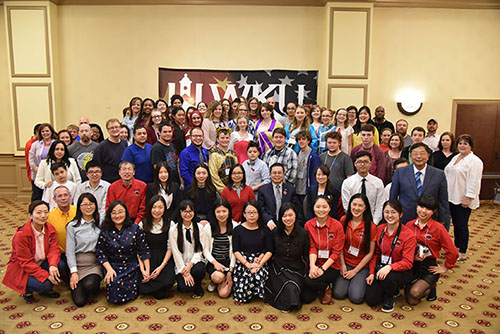 Sixty-five students showcased their knowledge of Chinese language and culture during the Confucius Institute at WKU’s inaugural Chinese Bridge Competition on March 25.

For the past couple of years, the Confucius Institute at WKU has focused on increasing the number of students and increasing the footprint of the program as a whole, according to Terrill Martin, managing director of CI at WKU. “With over 16,297 students enrolled in the CI at WKU program, it is important to ensure that there is not only exposure to the Chinese language and culture, but that the students are learning and retaining the language,” he said. “The only way to ensure proficiency is through assessment.”

That assessment is the Youth Chinese Test (YCT), an international standardized test directed at examining non-native primary and secondary school students’ ability to apply Chinese language in their studies and daily lives.

In 2014, according to Hanban/Confucius Institute Headquarters, over 421,651 participated in the YCT/HSK/BCT assessments worldwide, including 15,601 students from the United States. Of that number, 2,732 were from the CI at WKU, with a passing rate of 12.10 percent.

“Based on these results, it was now time to showcase these students who are dedicating themselves to the study of Chinese language and culture,” Martin said.

The inaugural Chinese Bridge Competition, held at the Augenstein Alumni Center, was a great success for WKU, the area school districts, the students and the Confucius Institute, he said.

The winners from the middle and high school contests will be invited to participate in the regional competition at Valparaiso University in late April.

About the Confucius Institute: The CI at WKU is a conduit of all that is China. These partnerships are far reaching that will not only create or advance research for faculty/staff, but offer research and internship opportunities for WKU students. Anyone interested in partnering with us or interested in creating programs, contact Terrill Martin at (270) 745-2530.