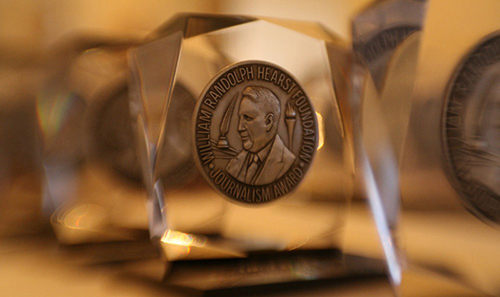 WKU’s School of Journalism & Broadcasting has won the Hearst Journalism Award Program’s Intercollegiate Photojournalism Competition for the 23rd time in the past 28 years.

WKU student Srijita Chattopadhyay, a senior from India, won the Photojournalism Picture Story/Series Competition in the 2016-2017 Hearst Journalism Awards Program. Chattopadhyay received a $2,600 award and qualified for the semifinal round of judging in April. Lydia Schweickart, a freshman from Louisville, finished 10th.

WKU also remains in first place in the Hearst Multimedia Competition with first- and third-place finishers in the second multimedia contest.

Alyse Young, a senior from Redmond, Washington, won the Multimedia II/News Competition for "At the end of the American Dream" from WKUPJ.com. She received a $2,600 scholarship and qualified for the Hearst National Multimedia Championship in June in San Francisco. Young finished second in the 2016 Hearst multimedia championship.

Betina Garcia, an exchange student from Denmark, placed third in the competition and received a $1,500 award. The School of Journalism & Broadcasting receives matching awards.

Often called “The Pulitzers of college journalism,” the Hearst Journalism Awards Program, now in its 57th year, includes five writing, one radio, two television, four multimedia and two photojournalism competitions offering up to $500,000 in scholarships, matching grants and stipends; 106 member universities of the Association of Schools of Journalism and Mass Communication with accredited undergraduate journalism programs are eligible to participate in the Hearst competitions. Schools accumulating the most points earned by their students in each category are designated the winners of the Intercollegiate Competitions. The final Intercollegiate winners will be announced in April.

WKU’s School of Journalism & Broadcasting, which placed third overall in the 2015-16 Hearst program, has finished in the top five nationally in the Hearst overall competition for the past seven years, in the top eight for 23 straight years and won the overall national championship in 2000, 2001 and 2005.