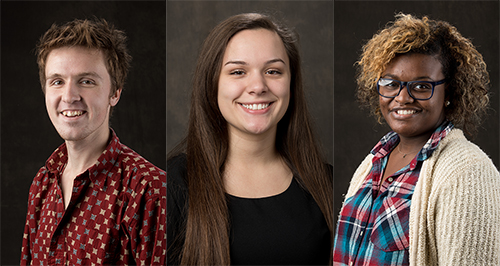 From left: WKU students Isaac Barnes, Anais Compton and Jada Jefferson were selected as Gilman Scholars for the spring 2018 semester.

Four WKU students were recognized by the Benjamin A. Gilman International Scholarship Program. Isaac Barnes of Frankfort, Anais Compton of Bowling Green and Jada Jefferson of Louisville were selected as Gilman Scholars and will receive up to $8,000 to fund their study abroad programs during the spring 2018 semester. Sarah Olive of Louisville was named an alternate.

Barnes, a fourth-year theatre and Asian religions and cultures major, is the son of Susan and Chris Barnes. He participates in the Happy Gas Improv troupe and plans to participate in the Peace Corps. He will use his Gilman Scholarship to fund study abroad in Thailand during the spring semester.

“The most important thing for me about studying abroad is getting to continue my studies in a totally new environment,” Barnes said.

Compton, a second-year Spanish major and student in the Mahurin Honors College, is the daughter of Heather Somerville and Adam Compton. She plans to use her Spanish language skills as a professional translator. She will use her Gilman Scholarship to fund study abroad in Spain during the spring semester.

“Studying abroad has always been a dream of mine because I know it will expand my cultural worldview, challenge me both personally and academically, and improve my understanding of the Spanish language,” Compton said.

Jefferson, a third-year theatre and diversity and community studies major, is the daughter of Shawn Moore.  She teaches in the Theatre in Diversion program, a partnership between WKU Theatre and Dance and the Warren County Juvenile Court. She will use her Gilman Scholarship to fund study abroad in the United Kingdom during the spring semester.

“I want to change the world,” Jefferson said, “but first I must see more of it. With the help of the Office of Scholar Development at WKU all of these things are now possible.”

Olive, a third-year English major, was selected an alternate for the Gilman Scholarship. She is the daughter of Mary and William Olive and will be studying abroad at Harlaxton College in the United Kingdom during the spring semester. She plans to become an author of short stories and novels.

“The financial support from the Gilman Scholarship program is critical for many WKU students studying abroad,” said Cory Dodds, coordinator of nationally competitive opportunities in the Office of Scholar Development. “After their study abroad experiences, our students return to the Hill as more engaged, knowledgeable and culturally-sophisticated scholars.”

Funded by the U.S. Department of State, more than 3,400 Gilman scholarships will be awarded this academic year for undergraduate Pell Grant recipients to study or intern abroad. Since 2001, the Gilman Scholarship has enabled more than 25,000 outstanding Americans of diverse backgrounds, including ethnic minorities, students studying science, technology, engineering and mathematic, and students with disabilities, to engage in a meaningful educational experience abroad. The program has successfully broadened U.S. participation in study abroad, while emphasizing countries and regions where fewer Americans traditionally study.

About the Office of Study Abroad and Global Learning (SAGL): SAGL serves the WKU community by engaging students, faculty and staff in diverse, educational and cultural experiences through faculty-led, exchange, consortia and other study abroad opportunities. For information about the Office of Study Abroad, visit www.wku.edu/studyabroad. The office can be contacted via e-mail at study.abroad@wku.edu or by phone at (270) 745-5334.