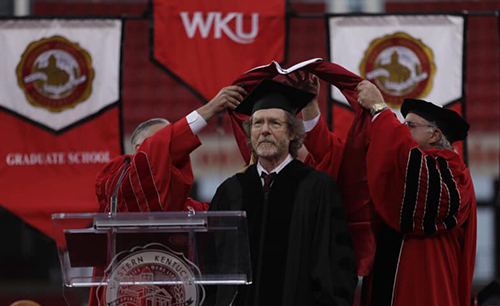 Sam Bush was just days away from registering for his freshman year at WKU when he was invited to join a band in Louisville called Bluegrass Alliance.

Last weekend Bush received an honorary doctorate from his hometown university as WKU's Amy Bingham tells us in this week’s View from the Hill.

“Dr.” Sam Bush has a nice ring to it. It’s just the latest career achievement for the Bowling Green native who has been receiving accolades since he first began playing mandolin at age 11.

“I didn’t actually make it to Western but I went to what many call Bluegrass College.”

"I grew up on a tobacco/cattle farm out Morgantown Road, Highway 231 about five miles out.”

The celebrated mandolin player, dubbed the father of newgrass music, returned to this hometown last weekend to receive an honorary doctorate in fine arts from WKU.

“Sam Bush is a revered member of the bluegrass community who never forgot his Kentucky roots.”

“It rates the greatest thing that’s happened since my wedding date, that’s where it rates.”

It was the first time Bush had been on WKU’s football field since he was in the marching band at Warren Central High School.

“Me and the trumpet player, somehow we mistimed our steps by about six steps so when we made our turn we looked around and the entire band was about thirty yards from us, didn’t lead to the best score of the day.”

So what if Bush had enrolled at WKU rather than continuing his musical journey after high school?

Out of all his collaborations, he calls playing with the Sam Bush Band his favorite.

“That’s the most gratifying thing when all five of us are playing together and the audience is giving us back the love, that’s the best part. “

That and now being called Dr. Sam Bush.

“I never thought this would happen. Everyone smile I’m taking a snapshot, thank you so much.”

Bush was hospitalized last Sunday with gastrointestinal issues and was forced to cancel a show in St. Louis. He is reportedly doing well and we wish him a speedy recovery.