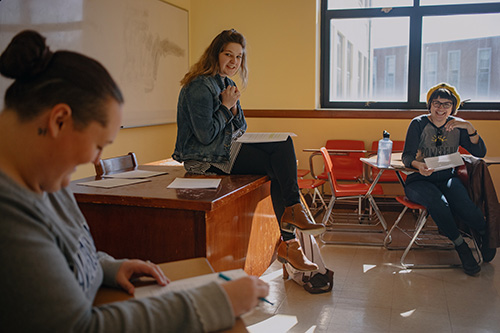 “Our hope for First Things First is to start those difficult conversations. We want people to leave knowing that their voice matters and can make a difference,” said Kelsey Redding, a WKU student from White House, Tennessee, who is coordinating the First Things First event taking place Tuesday (April 16) for Sexual Assault Prevention Month.

Redding started interning at Hope Harbor, sexual trauma recovery center, in January 2019 to complete an internship for her criminology major. “Advocating for sexual assault prevention and survivors is something I've been passionate about for a while and I loved what Hope Harbor was doing to be a part of that.”

Although Redding has other responsibilities in the office, one of her main responsibilities at Hope Harbor is coordinating First Things First, a storytelling event featuring poetry and narratives in partnership with Jessica Folk, Assistant Professor in the WKU English Department. The purpose of the event is to give individuals a space to tell their stories the way they want to. “Their story doesn't have to be one as a survivor of sexual assault, either. It can be anything from their struggle with gender identity, race, or body image,” Redding said. “The pieces we have that make up this event explore those themes as well as ones of empowerment and recovery.”

Redding said the title, First Things First, is a play on the common phrase noting that the only way issues like these can be resolved is to first and foremost have a conversation about them. Redding has helped facilitate auditions for First Things First, written a short script to transition from the pieces in the performance, and helped direct practices.

As Crisis Intervention Specialist, Alayna Milby supervises Redding in her internship. Milby coordinates volunteers along with fundraising and outreach. “When she came to me interested in an internship for this semester, I was very hesitant and upfront about my hesitance in taking on an intern. When Kelsey mentioned she was a theatre minor and had experience directing youth in theatre, my brain lit up with an idea for a performance like what she has developed. She came up with the title, the script, made decisions on auditions, designed the promotional material, and set design,” Milby said.

Redding added, “As I am going I am learning more about how to successfully advocate for survivors as well as just learning how to work well with other individuals. Each practice we're getting together to hear everyone's pieces again and I find that I'm learning how to better empathize and support people's experiences.”

According to Redding, the individuals who are involved with performing in the event are WKU students, community members, and Hope Harbor volunteers. They will be performing their own pieces or pieces written by individuals who submitted their work to be read.

“We want people to feel empowered by these stories and pieces and motivated to make a change,” Redding said.