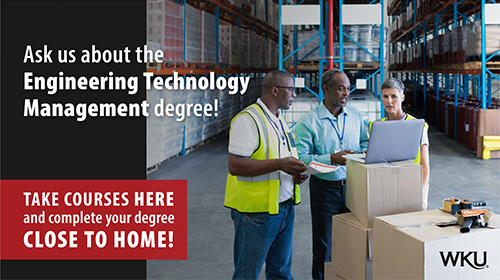 Students in the Elizabethtown-Fort Knox and Owensboro regions can now complete a bachelor’s degree in Engineering Technology Management close to home through WKU in Elizabethtown and WKU in Owensboro.

Engineering Technology Management (ETM) is a bachelor’s completion program designed for students who currently hold an associate degree from a technical school, 2-year college or 4-year institution and would like to enhance their career by obtaining a supervisory position within their industry. Students who complete the program receive a Bachelor of Science degree and are prepared to lead their business or industry toward innovation and global competitiveness.

According to the U.S. Bureau of Labor Statistics, average salaries for professions in this field include $51,910 for technology educators, $89,190 for industrial plant managers and $120,950 for systems managers.

WKU summer 2020 courses will be offered online or through synchronous activities delivered with no personal contact. The Summer Scholarship will be increased to cover the cost of online courses for eligible undergraduate students enrolled in six hours.