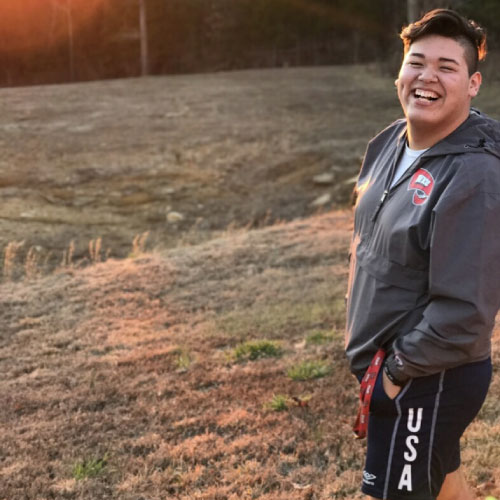 As a senior in the Social Work program in WKU’s College of Health and Human Services (CHHS), Jonathan Silva has a seat in many campus organizations and continues to seek out opportunities to build a sense of camaraderie. His journey started, though, as a teenager from Wheaton, Illinois just looking for a community that felt like family.

“My visit was unplanned, but the campus, was, and still remains to be, presented with the same excellence,” Silva said. While traveling from his hometown to Nashville, TN, Silva decided to stop in Bowling Green for an unscheduled tour of the WKU campus. “The university is filled with people that want to put on their best for anyone that steps foot on campus and you feel that immediately, it’s just a beautiful place.”

Silva currently serves as an ambassador for the Social Work Student Union and for the college, is a member of the Phi Alpha Honor Society and CHHS Diversity Council, and is a leader for a WKU campus ministry.

“WKU has an activity or student organization for everyone! The ones that I’m involved in always strive to make a difference with people on campus and in the community.”

Giving back to his campus community is a priority for Silva. “I want to make a difference - to be a world-changer and leave a legacy. There are very few males in the field of social work. I feel responsible and want to set a good example for others.”

Silva will wrap up his undergraduate career in May 2020, but he plans to continue his education in social work in child welfare and advocating for children that do not have a voice for themselves. Looking further ahead, Silva plans to return to his second home at WKU as an instructor.

“After I toured the WKU campus [for the first time], I knew right from the start that I was home,” Silva said.

To learn more about the Department of Social Work, visit wku.edu/socialwork.

Amongst PPE shortages across the nation due to the global pandemic, a local group recognized a need and offered a creative solution to WKU and the Bowling Green community.